The man who read his newspaper upside down By Paul Jansen 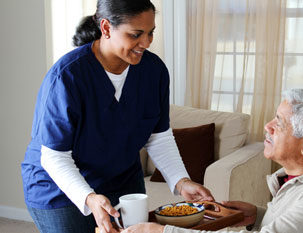 Aretta had been working with her client for a few days now. Jack was a typical case of a slightly lonely, elderly man in the London borough, with a range of support needs. Not seriously ill, just in need of some help every so often, and Aretta had become his ‘first responsible’ on behalf of the team.

She enjoyed her new job in the self-managed team of homecare workers. It wasn’t always easy. Especially getting the group to agree on important decisions had been a challenge. And there were a lot of decisions to make in the beginning, when the team was deciding on how to organise their work. Unlike any other care job she had done in her long career, here there were no managers to tell her what to do, or how to do it. The team had agreed with management what was expected of them, and that was it. Now it was up to them to decide how to carry out the work. In the beginning there had been a lot of heated debates, and not always was everyone listening to each other. But with the help of the coach they had become better at approaching these matters in a structured, solution-focused manner and had become rather good at it. Now meetings were efficient, the work had become well-organised, and Aretta felt that they had begun to reap the benefits of this new way of working. She especially enjoyed the freedom she had to use her creativity and her rich life experience. After all she had seen a thing or two during her lifetime, so to be told by some much younger manager how to carry out her work hadn’t always gone down very well…

Jack turned out to be a real character. She enjoyed getting to know him better and had spent quite a bit of time building a relationship with him. She wanted to understand him and what he wanted to get out of life, so that she could provide better care. Today, after the more routine elements of her work with him were out of the way, they’d started chatting again. “Shall I bring you a newspaper next time I’m coming?”, she asked. “I noticed you seem to enjoy the news. You seem well-informed.” “Yes, please!” he said. “I love reading the newspaper”.

And so she did. Two days later she was back and handed over the papers her husband had read that morning. “Thanks”, Jack said, and started reading immediately. “Hey, what are you doing?” Aretta couldn’t help herself but had to laugh. “You are reading the paper upside down! Is this your party trick or something?”.

Poor Jack. It wasn’t at all funny. It turned out that he had lost his reading glasses over 6 months ago. He hadn’t been able to read a single thing ever since, and no-one had been able – or even asked – to help. Especially since his glasses had cost him a small fortune, he was too afraid to go back to the shop and get a replacement.

Aretta was determined to do something about it. Back at base she talked it over with her colleagues in the team. Surely reading glasses didn’t have to be THAT expensive? Even if Jack did have special requirements. The team decided to speak to a range of local opticians and find out what could be done. A few calls and a few days later, Aretta proudly presented Jack with the best option. A nearby optician could do him two pairs of new glasses for a quarter of what he had spent on the previous – single! – pair. Delighted, Jack and Aretta went to see the optician immediately and a few days later Jack was sorted.

“Now that I can see again”, Jack said, “is there any chance you can write down some recipes for me? I’d love to make some of the Nigerian food you have been bringing me once or twice.” Over the following weeks, Jack became quite handy in the kitchen, and started to really enjoy trying out new recipes. His eating improved and so did his mood. Aretta couldn’t believe what her contribution had managed to achieve. Just by being encouraged to bring all of herself to her job and having the freedom to use her judgment and experience to find creative solutions, she had been able to transform this person’s life in a short space of time. It seemed so simple. Why aren’t all care jobs organised like that…?

Both names have been changed and we have used a library image for this story.