Self-managed neighbourhood care in a global pandemic: how is Buurtzorg doing? 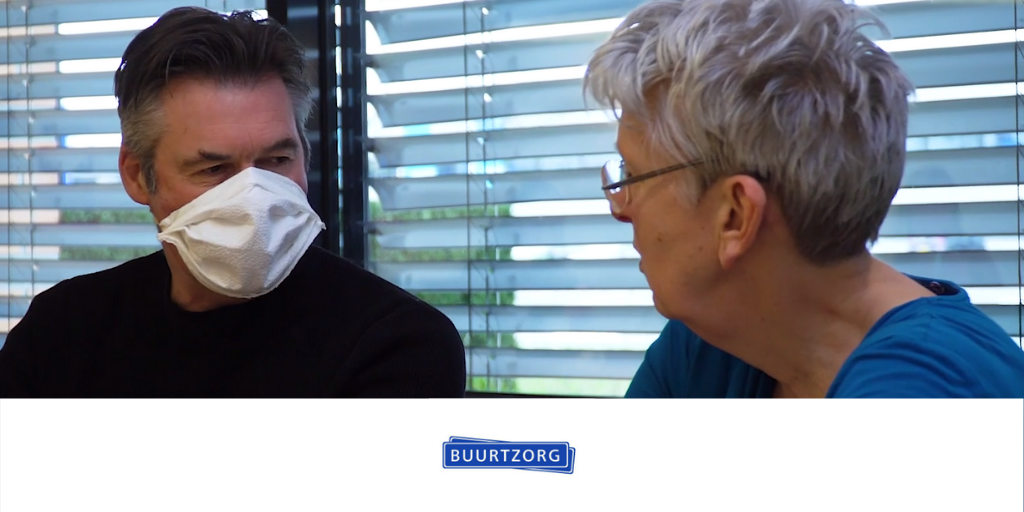 How does a home nursing provider that operates through small, self-managed neighbourhood teams respond to the unprecedented crisis that has engulfed the whole world’s health and care systems and economies?

Buurtzorg Nederland, the largest Dutch home care provider that has grown from one team of four when it was founded in 2007 to more than 10,000 nurses and nurse assistants today, is doing so by trusting in the basic principles behind its growth and success.

That means not only relying on the professional ability of its teams to work with their patients and communities to create their own solutions, but also to provide those teams quickly and responsively with the support they need to do so effectively.

The other day I joined fellow Buurtzorg partners in more than a dozen countries around the world – including China, where the Covid-19 virus was first identified in humans – in a webinar to hear from Buurtzorg founder Jos de Blok and some of his colleagues.

Buurtzorg teams benefit from a lean and highly responsive back office that provides administrative and other services to them. They are also supported by regional coaches – one to about 45 teams, so that they support self-management rather than supplanting it.

The present crisis has required new supports for the teams and Buurtzorg has responded in a way that has been typical of its values and approach: by learning what is needed from the frontline professionals themselves and creating innovative solutions.

So, as teams found they needed help with such challenges as continually changing clinical guidance and equipment supplies, a central Crisis Team was formed to keep track of and interpret regulatory changes, gather and disseminate the latest clinical evidence, and so on.

“We are learning from each other, cutting out doing unnecessary things and discussing which decisions need to be centralised and which decentralised,” said Jos. The context may be unprecedented, but the principle as ever is to support local customisation within a shared framework.

Composed of experienced nurses, an epidemiologist and Jos himself, the Crisis Team is self-organised and meets for an hour at the same time every day. It is available to the teams 24/7, just as the teams themselves are to the people they support.

Its role, said Jos, is to listen to the concerns and fears of the teams, review the information and requirements coming from them and from the government, doctors, other health and care providers, and so on, and respond in practical ways.

“Every day the government guidelines change – it is a full-time job just keeping up,” one of the Crisis Team members said. “What I was telling people on the phone yesterday is no longer in force today!”

Nurses can check a constantly updated Frequently Asked Questions section on the Buurtzorgweb in the first instance, without necessarily calling a coach or the Crisis Team.

“The Crisis Team is amazing,” said Jos. “It is self-organised and building up experience very quickly. The coaches also have a very important role in handling questions from the teams and they are being supported by the Crisis Team.”

As in Buurtzorg’s neighbourhood teams, although there is no hierarchy in the Crisis Team, “different people have different qualities and they just ‘pop up’ as needed,” one of its members said. “For example, someone who is good with academic articles and summarising their key points; or someone particularly good at handling phone inquiries.”

The neighbourhood teams themselves have had to innovate in real time, and the Buurtzorgweb, coaches and the Crisis Team can share their experience across the organisation quickly.

“We ask people who call the crisis team what solutions they have in mind. Sometimes there are different opinions in the teams and we discuss it.”

Buurtzorg has always supported its clients to self-manage their care as much as possible, and nurses work also to mobilise family and neighbourhood supports. That is even more important now, not least because of stretched supplies of Personal Protection Equipment. Buurtzorg has started to produce its own and has posted videos showing how to make home-made masks if it comes to that.

“The key issue is to protect ourselves and our patients,” said Jos. “So some teams have set up a corona rota – just a few nurses on that. We are reducing contacts as much as possible.”

This has financial implications for the social enterprise, because insurers still pay by the hour of care provided, and therefore Jos is speaking to them about that. He is in a strong position to do so because since it was founded Buurtzorg has reduced the average number of hours per client by about half, thus reducing costs while improving care.

But the biggest challenge is yet to come. “We also have to prepare ourselves to take care of very severely ill coronavirus patients,” said Jos.  Intensive care in hospitals is already blocked in many places, and so Buurtzorg is organising a ‘hospital at home’ approach for which it has secured government approval.

With more than 900 self-steering teams already in place right across the Netherlands,  Buurtzorg has the basic organisational infrastructure already in place. Only time will tell what a difference it will make in these unprecedented times.