Trust is a two-way street 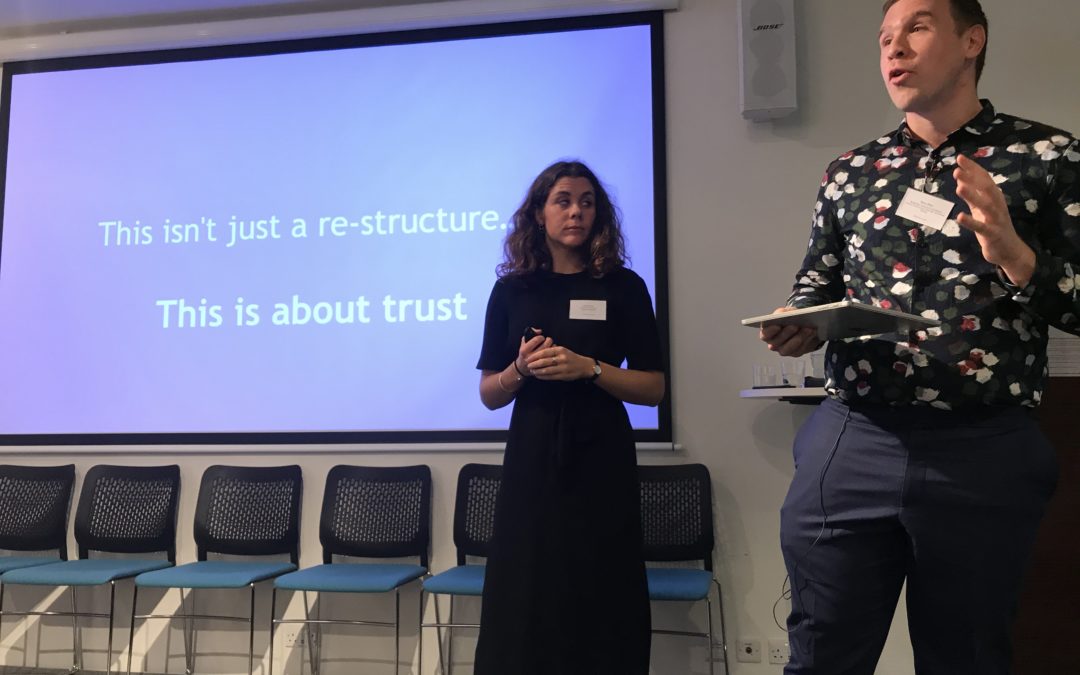 “Too many eyes, not enough hands.” That is the quote – describing the children’s social work environment — that resonated most at the London launch of A Blueprint for Children’s Social Care: Unlocking the potential of social work this week.

The booklet, to which I contributed on behalf of Buurtzorg Britain & Ireland, sets out a vision about how children’s social care could change if its professional practitioners are enabled to work in the Buurtzorg way. That involves building relationships and co-creating solutions with the people they support, and supporting and guiding each other in self-managed teams.

The phrase “too many eyes, not enough hands” resonated because it vividly captures the reality that social workers spend too little time supporting vulnerable children and their families and too much explaining themselves to their managers and the wider system.

However, in the discussion at the launch, another point of view, equally valid, was expressed by a young social worker who wondered who would provide the advice and oversight she currently receives from her manager.

Referring to the proposal in the ‘blueprint’ that non-hierarchical self-managed teams of eight professionals would each support 14 families, she was sceptical they would all know enough about each of them to provide the oversight she needs.

The group suggested that while no social worker should be a ‘lone wolf’, teams could decide how best to arrange mutual supervision among their members, and their organisations could provide access to others with relevant experience and qualifications, as the ‘blueprint’ suggests.

That highlights the need for balanced composition of teams, so that each contains a range of expertise and experience, which in turn suggests a solution to another issue raised at the launch – how to manage career and salary progression without a managerial hierarchy to climb.

In Buurtzorg itself, pay levels are determined by national collective bargaining arrangements and individually related to levels of qualification and experience. That represents a hierarchy of sorts, of course, but brings responsibility to advise and guide other colleagues rather than exercise power over them.

The ‘blueprint’ elaborates an organisational structure designed to enable and support greater professional freedom and responsibility, drawing on advice from around 80 social workers and system leaders, but of course there is no substitute for testing and learning at local level.

This should start from the perspectives and needs of the communities and families served by children’s social care – another key point expressed in discussion at the launch – which could be a challenge in itself to national and local government.

It is a point that takes us back to what this is all about. The researchers and principal authors of the ‘blueprint’ – my main role was advisory — have done a fine job of researching the present reality and imagining an alternative future. However, any local authority inspired by that vision – as I hope many will be, and we are ready to help them achieve it – should plot its own pathway.

Indeed, if the intention is more trustful relationships between the people social workers support and the social workers themselves, and between the latter and the organisations and systems of which they are part, the journey itself will determine the destination.

Trust is at the heart of the Buurtzorg approach, and the ‘blueprint’ refers repeatedly to mistrust of social workers. It’s a key point, but an easily overlooked consequence is that many social workers have come to reciprocate that mistrust, often with good reason.

If the professionals at the front-line are to be expected to work with greater freedom and responsibility, they are entitled to expect that those who employ them and fund their work provide – as Buurtzorg does — the supports they need to do their jobs well.

Unless that happens, many social workers might perceive self-management as an additional burden and risk rather than the liberation of their intelligence, knowledge and creativity that it could and should be.